2015 Mitsubishi Triton on the Birdsville Track

Who doesn’t like a trip to the races? But what happens when those races are 1900km away at the end of a rough track in the Outback… Hannah Statham takes the wheel of a 2015 Mitsubishi Triton to find out.

IF YOU TOLD me at the start of this year I’d drive a 2015 Mitsubishi Triton along the Birdsville Track, I wouldn’t have believed you. But I put 1900-kilometres between me and my comfort zone, as I set off with 11 other women who wanted to drive to the iconic Birdsville Races from Brisbane.

Road trips aren’t usually my jam. I’m an office mouse who averages a lazy 1000-kilometers a year in a car that burns a track between home, the gym and grocery store.

Needless to say, I’m the girl least likely to buy a Mitsubishi Triton but this is the car I was test-driving on Queensland’s off-road piece de resistance – the Birdsville Track – and I really enjoyed it.

The Triton and I had a long time to get acquainted and I realised that first impressions can be deceiving. At first glance, the Triton seemed a bit blokey for me, with its big tray, tough nose and considerable height.

But it didn’t feel masculine for long – our trail master Dave from Australian Offroad Academy referred to it as a “Mitsi” (cute!) – and with the metallic blue paint contrasting perfectly with the red dirt of the outback, the Triton quickly became the pin-up car in our convoy.

This was my first time driving a ute with a canopy, so I had a few reservations – especially about visibility.

My 4WD instructor Dave was quick to point out that poor visibility is part and parcel of canopy-land because the gap between the main cabin and the canopy can’t be cleaned.

With limited visibility out the rear view mirror, we relied on the side mirrors, which were sizeable and made up for what we couldn’t see through the back.

One of my biggest gripes with the Triton was opening and closing the tailgate – and I promise it wasn’t just user error.  The top of the canopy unlocks with a key that resembles the one I use on my filing cabinet – small, plasticky and a bit dinky. This key system seemed so archaic for a car that has keyless entry and a push button to start the engine.

The bottom half unfolds conventionally, but you are left with the weight of the tail gate in your mitts. I’m no manufacturer, but surely this could be on some sort of soft release?  I know it’s the same for all utes, but there are aftermarket gas struts which take the strain out of the tailgate release, allowing it to smoothly and slowly open with just a touch of a release.

This is probably fine for the Triton’s target market (tradesman and off-road warriors) but for this city mouse who can’t lift a barbell, it was a real drawback to opening the boot.

If you’re not taking this thing off-road, I’d have no further comments about the canopy but we spent a full day off-roading the Strzlecki Desert (an 80,000 square kilometre sandpit), which left the tray looking more like my Dyson vacuum cleaner than a sealed canopy.

The always-diplomatic Dave was quick to assure me that no car is completely dust proof, but I compared my dust situation to his canopy and the Triton’s was substantially worse.

If you cart expensive equipment and plan to off-road, best to wrap your gear in plastic or prepare for a significant clean-up effort. Or, invest in one of the aftermarket canopy-and-tailgate sealing products, which you’ll need if a ute and canopy combination is to come anywhere close to the dust-sealing capability of a wagon.

But enough about the canopy, it’s a cost-optional extra anyway (and there are plenty of aftermarket offerings beyond the factory arrangement), and I’m more about the comfort and leather seats, if I’m being honest.

I’m pleased to report the interior cabin gets two enthusiastic thumbs up from me. The interior was fancier than I expected and balances comfort with practicality, which suits the car’s core market who use the car for both work and play.

Even though we got the car as dusty and dirty as the Birdsville track, you had to look closely to find any scuff-marks on the black leather, which we dusted off with a few wipes.

The powerful air-conditioning was a decent match for the Outback heat – and we were able to create microclimates within the cabin.

On bitumen, the Triton is light on its toes, easy to park (thank goodness for the reversing camera) and offers a tight turning circle (11.8m) considering how long it is from nose to tail.

The stereo system was great and pumped our playlist via Bluetooth and a USB all the way from Brisbane to Birdsville. Call me old fashioned, but I tried to play a CD and realised the car didn’t have one, which is more a sign that I should get with the times than a reflection of the Triton. [Ed – it does have a CD player, you press “open” on the infotainment unit which tilts the screen to reveal a disc slot ].  We didn’t tinker with the GPS and communication system as much as we could have but it was there and easy to use if required.

My co-pilots Fleur and Nanna also loved the Triton’s cabin and affectionately called it our outback sanctuary.

I’m as short as my co-driver Fleur was tall, and both of us could adjust our seats to the perfect position. Our other driver, Nanna (so named for her propensity to drive close to the steering wheel), also found her perfect wheel height with the tilt and reach steering adjustment.

For some time, I put my feet up as a passenger and cruised in the backseat, where I found my true calling in the Triton. The roofline scales up, so the backseats are higher than the front, which gives excellent visibility from the back.

The cabin size feels as big as my bathroom and the reclined seat-angle means you could fit five adults comfortably, or at least, we could fit five birds driving to Birdsville with no problems.

Appearances matter in the Outback, where cars are accessorised to look tougher, but we didn’t feel out of place in Blue Booty (our nickname for the Triton) thanks to its pretty aggressive grille and chrome nudge bar that screamed tough.

Blue Booty was right at home on the Birdsville Track which connects South Australia with Queensland, intersects two deserts and greets visitors with a warning sign to pack enough food and water in case of emergency.  After all, it was in this sort of country where Burke and Wills met their respective ends.

There was no risk of a Burke and Wills episode for us – the fuel economy was great (and we loaded up on snacks). In fact, we only filled up the diesel a handful of times in getting to Birdsville.

Under the guidance of the unflappable Dave who put his hand up to drive 11 ladies to Birdsville, we learnt how to handle the corrugations with ease.

The Triton lapped up the dirt road – and didn’t blow a tyre like other cars in our convoy. Blue Booty had standard clearance (205mm), but even at factory height, sailed over the rocks, dips and corrugations on the iconic track.

Switching from high-range to low-range 4×4, two-wheel to four-wheel drive using the Super Select system was as simple as a twist of a knob, which beat the complex clutch and clunky gear stick systems that I saw in other cars on the trip.

The desert made for hard driving as dust mushroomed, stones flew and the road disappeared, but our main windscreen had great visibility and we were easy to spot in blue, especially with a desert flag attached to the front.

The reward for driving 1900 clicks was rolling into Birdsville, windows down, music pumping knowing that we did it – we pushed through our comfort zones.

The Triton was a great mechanical stead. It felt safe, was comfortable and totally looked the part for an off-roading adventure.

My view is that the Triton seemed just as much at home on bitumen as off it. After all, with these roof racks you couldn’t take it into an underground shopping centre in the city, even if you tried. Yep, this Blue Booty was made to have dirt on its alloys.

The Blue Booty is A 2015 Mitsubishi Triton Exceed DUALCAB UTE

It is wearing a few factory options:

Don’t miss our full review of the Triton Exceed and the Exceed/GLS comparison which includes some of accessories listed above  If you want a Mitsubishi wagon, well we’ve covered that with our Pajero long-term review and there’s also the Outlander…

Thanks. A good read.
Have you seen the Mitsi ads? What did you think of them?
BTW Burke & Wills perished a bit east of the Birdsville Tk.

The question was directed at Hannah Robert.

Hi Ziggy, I haven’t seen the ads. Tell me more. I am intrigued.

Oh I lie, I have seen those ads. Not my favourite ad, then again, I don’t think the car is really targeted at my demographic.

No.
But given how many 4WDing blokes refer to their partner as the minister of finance, a pitch that might readily alienate her seems to me to be a bad call. Why not build on the value for money rep the vehicle has?

Very true! Minister of finance hee hee (I’m going to use that)

Well, aside from anything else it’s going in my List of Bad Ads because it shows the car in salt water. I’m also not a fan of the storyline, truth be told. Many blokes are trying to get their other halves into this sort of car/lifestyle and this advert is not helping. 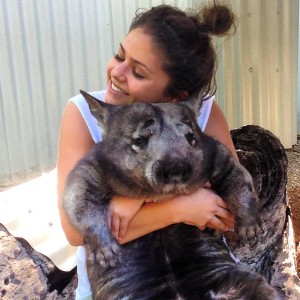 Contrary to what Hannah’s Instagram feed will have you believe, this pocket rocket spends most of her week in a desk job. When she's not behind the desk you'll find her adventuring with her greyhound Olivia. Cars used to be just something to get from A to B, but perhaps her love affair with all things fast and furious (beyond Vin Diesel) has gone further. She's slowly dipping her toe the world of roadtrips and documenting her journeys.

2015 Mitsubishi Triton on the Birdsville Track