The evolution of a car enthusiast

Modified street cars to offroad 4WDs – how did I end up here or, the evolution of a car enthusiast.

IT HAS BEEN SUGGESTED to me that I change cars as often as I change underpants. In case you’re wondering, that means daily… the underpants, not the cars.

There’s a whole spectrum of car enthusiasts – some people hold onto their cars for life, others change cars quite regularly for any number of reasons. And I fit somewhere between those two. At least one of my cars I owned for a while, which I put down to first-car-love. The others have tended to stay in my life for around one to three years. Was it itchy feet, did I fall out of love with them? A little, but that’s not the whole story.

Being a car enthusiast shouldn’t mean you’re stereotyped into one genre, or one scene, for it is an ever-changing hobby. I’ll draw on my own experiences here. Some say that I’m a Japanese car enthusiast, and yes, looking at my car ownership history of five Nissans and two Subarus it definitely appears that way. But it’s not why I’ve ended up owning seven Japanese cars to date. The reason is that they’ve satisfied my desire at that particular moment in my life. That they’ve happened to be Japanese is largely unrelated.

I’ve watched other car enthusiasts evolve as their needs have changed. Maybe the Skyline or (insert any other impractical sportscar here) they had as a single person no longer fits their life of family transport duties. Or they’ve grown tired of the attention their WRX with a loud exhaust attracts. Whatever the circumstance, they’ve found themselves having to come to a compromise, commonly moving to something that whilst satisfying their changing needs, still tickles them in the right spot.

I come back to my own story, at a cross-roads in my own car ownership life. I’ve found myself moving away from a scene I know so well – modified street cars and sportscars – into one that I’ve received a late introduction to, that of offroad 4WDs. See, what excited me before – squeezing more power out of a car as well as well as making it look aesthetically fast, tackling a hillclimb, a motorkhana, a track day – has been diminishing, and the allure of exploring the country, maybe encountering a challenging situation or two along the way has been increasing. I shouldn’t be surprised if there are others out there with similar passions, they’re both car enthusiasts and nature enthusiasts.

Don’t pigeon-hole yourself. You could be missing out on a whole other world of cars that could take you to places and see you making friends you never expected.

Are you a car enthusiast who has changed your interest over time, maybe from street to offroad, or track to vintage? Tell us your story…

*puts hand up* I have a GTI-R in pieces, an Evo in the garage, a Fortuner parked next to it and a Getz in the driveway. The CFO doesn’t know it yet but the Fortuner is slowly getting a mods

No love for the Getz?!

It’s the daily hack, it getz all the the love. No pun intended

Started out with street cars, tried going down the hardcore 4WD route, and now am looking mainly at touring 4WDs as I want a better blend of on and offroad abilities than my current vehicle offers…

First car the sensible affordable option of Toyota Carolla 87 hatch in beige. It was a ripper, front wheel drive manual, light and could be pushed unforgivingly and still smile. As the electrics destroyed itself I took a step to a more comfortable modern get about the Holden Barina (Opel Corsa) and it was pretty fun too, a little dull on steering but could still throw it about.

I have to say that getting my license was goal #1 in my life, to be free and to just drive. Spontaneous collections of mates along the way created many unintended road trips and memories.

Then I wanted to get a more substantial vehicle to pack bikes in and maybe head off camping. I’m so glad I chose the Subaru Forester not the VW Golf I was considering at the time. It opened up my options for trips immensely. I joined a forum and became one of 10 people that actually wanted to take them off-road, instead of lowering I raised it. It was a poxy auto because of my commute but it could still work hard and with AWD beat many commodores off the line especially in the wet.

As I wanted to experience more I joined the Subaru 4wd club and a real spark ignited! My first weekend away was such an adventure I will never forget. Where we went and how it handled everything on stock rubber was amazing to me.

Eventually I had lifted the body, raised the suspension, bigger tyres with AT’s, bash plates, bullbar and lights. It was tough! The only problem was the off-roading gig was hitting hard, and I was taking it everywhere, following or leading my mate with a Land Cruiser running 33″ muddies, I have mechanical sympathy and felt the car would be destroyed or need a lot more money spent on it over the years if I kept this heavy use up so I switched to a Discover 3. What a life changing moment when I was only in my mid 20’s! The comfort, the ability, the dynamics this vehicle had was breathtaking. I was able to go driving independently for 3 weeks in the high country knowing I was in the best vehicle and that it had so much technology. It did everything so easily and differently to all my friends vehicles. What opportunities it gave me was just incredible. Unfortunately like you mention for one reason or another we change tact and switch cars.

I will be getting another one soon, but took the “must save money for a house and can’t go away every weekend on holidays” approach so I sought a fun get about… the Fiat 500s. Couldn’t be more different but when you love driving this car is a hoot, super solid cornering great feel and pretty cheap, until you get to servicing and the cheap build quality… but that doesn’t completely destroy my love for the car because so many other things make me smile when I’m in it. Like when I get out and people can’t believe a 6 foot 2 person can fit inside it. Pretty funny!

These are just the cars I have owned not including work vehicles, partners cars or ones I drove from the family before I got my car. Sorry for the long story!

Indeed it is..how about tidy it a bit think of a header and submit it as a Reader’s Write?

Was that for me Robert? I tried to register but have been busy… will re-submit. That way I can add images too? Caught me when I had a moment and love my journey and thought I’d share it.

Yes it was Adzee. Make it a bit more “why” for each car and pros/cons, then it should work. All stories need to have a reason to read not just a recital.

I love reading others journeys of how they’ve ended up with the cars they have.

I didn’t think mine was an unfamiliar story at all. It sounds like you don’t mind surprising people with an underdog car (namely the Forester). I’m considering doing something similar. I want a small 4WD capable of tackling some medium-hard 4WD tracks (winching all day or driving through mud bogs would not be my idea of a fun day out). It needs to be reasonably modern, reliable and under $30,000. Although they’re king of the small 4WD, I’ve struck Jeep off my list over reliability concerns (sorry Jeep owners) and I’ve so far narrowed it down to two choices; the obvious – Toyota FJ Cruiser, and the underdog – Suzuki Grand Vitara 3.2L (only made between 08-11). The path less travelled doesn’t bother me, and there’s a still a decent community of Grand Vitara owners that take their vehicles offroad. I have another 7-8 months of research ahead of me before I’m ready to commit to purchase. I’m stepping into a scene I don’t know so well and it’s a steep learning curve.

Great piece Juliette. Needs and desires change a lot over time. Must admit I’ve been tempted by a few good looking turbo Foresters for sale. The 86 is getting less and less love, the helmet and fire extinguisher are getting dusty in the shed and the great outdoors are calling my name.

Yes come join us, we have cake. 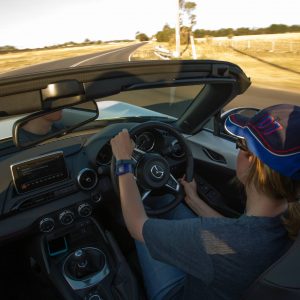 A car enthusiast with a background in the modified street car and sportscar scene with a developing passion for offroad 4WDing.

The evolution of a car enthusiast