How to keep snakes out of your car

Granted it’s not every day you’ve got to think about whether a snake has crawled into your car, but there are some simple tips for keeping snakes out of your car.

RECENTLY WE published an article on how to keep spiders out of your car and it proved popular, especially in this wet and then warm weather some parts of Australia are experiencing now. Snakes. They’re a completely different kettle of slithery things and, sure, there’s almost a million to one chance you’ll ever find a snake in your car, but we thought we’d talk to the experts at the Australian Reptile Park about how to keep snakes out of your car and what to do if one should appear in said car.

In a country like Australia which is just about wriggling with snakes, there are very few reports of snakes climbing into cars to find a warm dry place. Indeed, do a Google search and advice stories appear in the US, with forums lit up with questions on how to keep snakes out of cars.

Now, I grew up in the country and never once saw or found a snake in any of our cars. We did, however, have snakes in our lounge room, the laundry, and in the backyard near the wood pile. And only one of them ever escaped the snapping jaws of our dog… he was a brute of a dog who found and took on a King Brown that had been sunning itself at the base of a Hydrangea bush… it had protection and the dog did not and he was bitten a bunch of times on the face as he tried to root out the snake. He survived that encounter (thanks to the vet) and eventually killed the snake, I’m sorry to say. But I digress.

We spoke with some of the keepers at the Australian Reptile Park, and here’s what they had to say:

Question: What can people do to limit the chance of a snake making a home in their car?

Answer: Keep all doors and windows closed, try not to park your car around long grass or heavily wooded areas.

Question: Why would a snake want to make a home in someone’s car?

Answer: The snake does not see it as a “home” but simply a warm area (due to the engine possibly being run). The bonnet area also offers darkness which is attractive to snakes.

Question: Is it more likely to have a snake in your car if you live in the city or the bush?

Answer: In the bush.

Question: If people have seen a snake on their property is there any way they can check their car, meaning, anywhere in particular they should be looking?

Answer: It is more likely to find a snake in the engine area rather than inside the actual car; simply checking under the hood is sufficient.

Question: If the doors and windows of a vehicle are closed can a snake still get inside a car?

Answer: Very slim chance though the access again would be via the engine.

Question: If you find a snake inside a car, or curled up under the bonnet what should you do?

Answer: Leave the snake be and a call a snake catcher.

Question: Do you have any interesting stories of finding snakes inside cars?

Answer: Our keepers don’t do rescues as we are based full time at the park but there has been the odd occasion when people have driven all the way to the park from Sydney with snakes in their engine asking us to remove them, but for an experienced snake handler it’s not too hard of a job to remove them.

Question: Do you have any interesting snakes in a car type stories?

Nice to see you look after your readers ,as last week was spiders ,
I bought up the snake question seeing l live in PERTH WA
Regards ???

Regional SA is quite well supplied with snakes, most of which are venomous and occasionally they seek refuge in cars. Whilst the odd snake or two have found their way into a car at our place, I have a great deal more concern with mice. Despite a liberal supply of traps of various sorts and useless ultrasonic squealers mice do more damage to a car than snakes. At least the snakes eat the mice! Any suggestions on the mouse issue would be greatly appreciated. 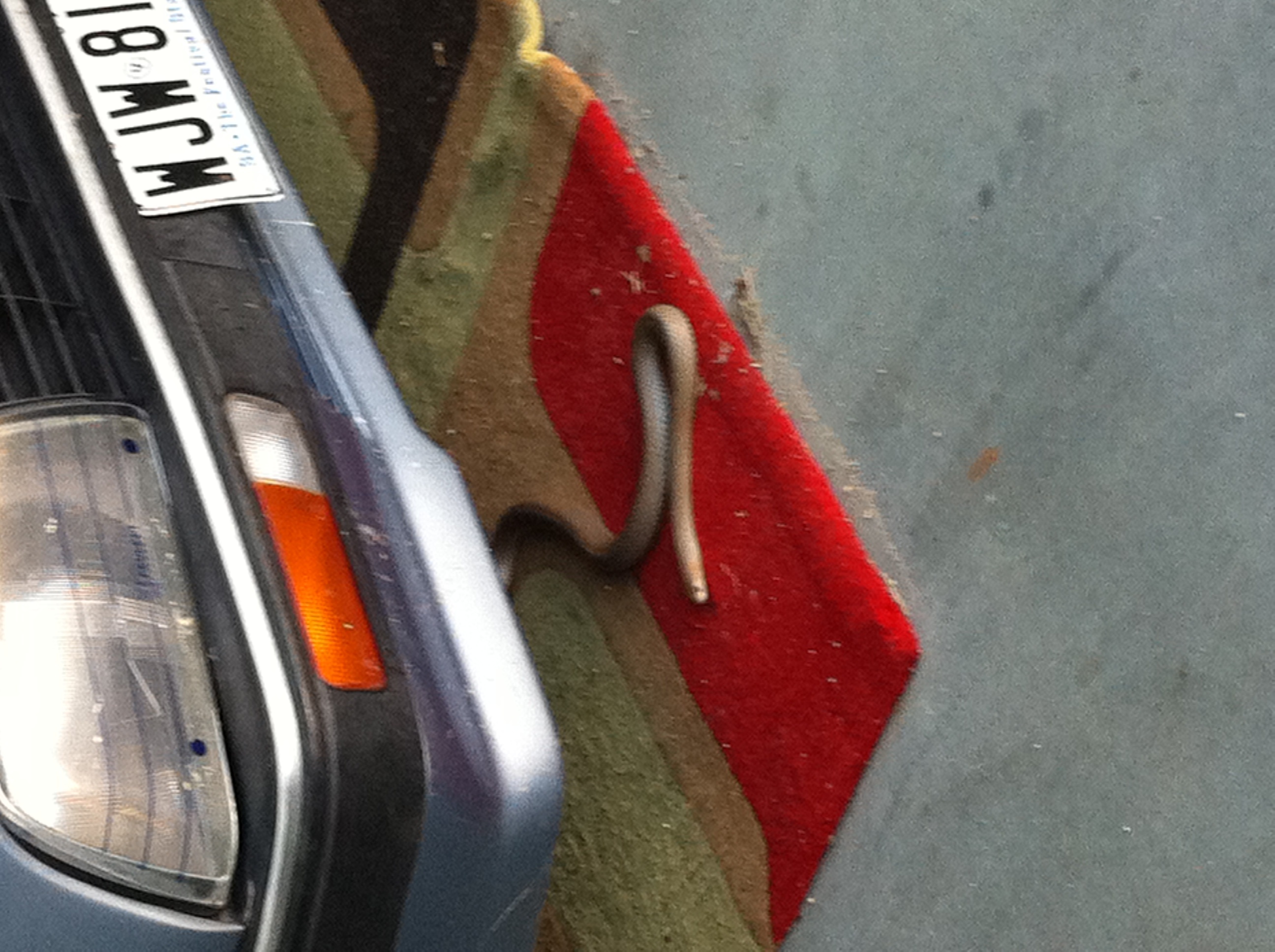 That’s just stupid about snakes in cars…. Since when can snakes drive? 🙂

Snake Story
I was driving around the suburban Brisbane (August 2015) when this snake appeared across the left hand side of windscreen area on my 12 months old Suzuki Grand Vitara. I pull over the side road and tried to locate a stick to flick it off. To my dismay, the snake found that the LHS mirror had room to hide in there. Back home phoned a couple of snake catchers whom all wanted $$ to come out. However one suggested to park the car outside overnight (my cars are normally garaged) and put tree branches next to the mirror and it will escape overnight. Could not see the snake the next day (inside the mirror) so had assumed it was gone until couple days later I noticed the green snake was still there! On visiting a mate (the next day), his neighbor was able to reach inside the mirror (with a bit of wire) and croaked it out to be released back into the nearby bush. It was only a common Green Tree snake but what a shock to realize that a “snake” was crawling across the windscreen whilst driving in the suburban Brisbane. (Can’t load a couple of images)

Things to look at when buying a used classic/enthusiast car

Quick tips to be a better car lover

How to clean car headlights

How to keep snakes out of your car